I woke up excited and nervous yesterday because, after months of planning and waiting, it was finally transfer day! But I was more nervous than anything. When we had the egg retrieval on Wednesday, there were seven eggs. Of those seven, only six fertilized. Of those six, only three were normal at our last update on Thursday morning. For that reason, our doctor was recommending a transfer on day three instead of on day five. They had been left in the incubator since that call on Thursday morning, and I was anxious for an update. I was worried that we would only have one or two left.

At 8am I started drinking 20 oz of water which I was to finish by 9am. I took Trevi on her morning 1/2 mile walk, something I never miss, but was going to have to skip for the next three days. At 9am, I took my valium and Aleve. I didn't think I felt any different until we were walking to the car and I mentioned that we no longer had dandelions in the front yard. Nathan, who doesn't really know  much about gardening, responded matter-of-factly that it was because there hadn't been as much sun. The certainty with which he said it was hilarious to me, and I found myself laughing more than usual. That's also when I noticed with surprise and relief that I was no longer nervous. 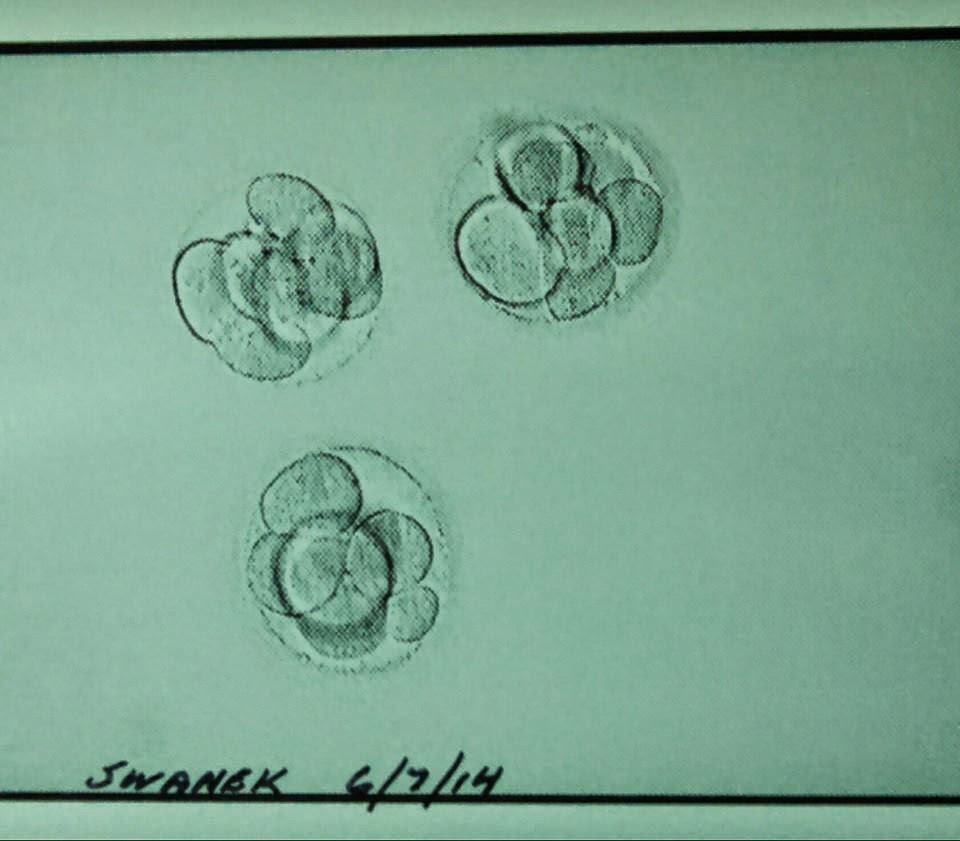 Do you think they look more like me, or Nathan? We were called back into the room and I could tell the moment that Dr. Werlin entered that he had good news. Three embryos not only made it through the last two days, but he said they looked really good! One had 8 cells, one had 7 cells, and one had 6 cells. On a scale of 1-4, with one being the best, he said they were a 1.5.

It was time for the transfer! Through the use of an ultrasound, we were actually able to see the three embryos leave the tube as they were transferred, which was pretty incredible. They looked like little orbs of light; like shooting stars as they were deposited. One, two, three. I rested for the next hour, and Nathan was given a demonstration on my new injections. My other shots were just subcutaneous, but these new ones would need to be given intramuscular and he had to give them to me. 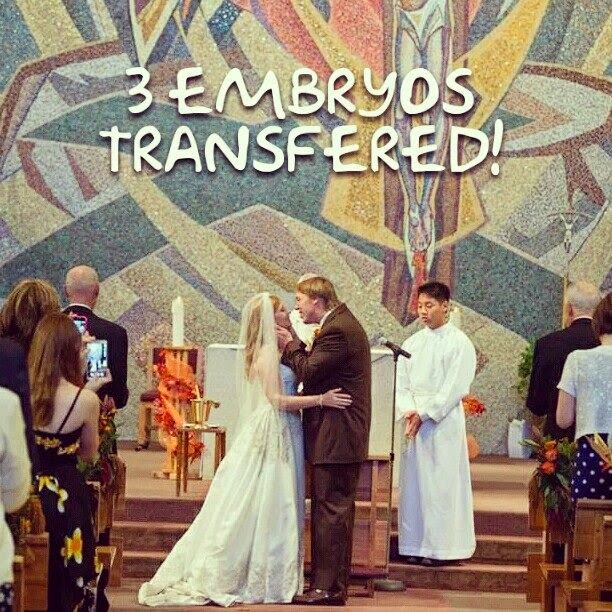 When I got home, I was still drowsy from the medication and thankfully able to sleep from 1-5pm. Around 7pm, it was time for my two shots: 1 ml of progesterone and .2 ml of estradiol valerate. I'm also taking 4mg of Medrol four times a day, 100mg of doxycycline twice a day and baby aspirin every evening. I was really nervous about the new shots, but we iced my bum for quite awhile first and I didn't feel a thing! It was so pain free, that I questioned if Nate had administered them correctly.

It's my second day of bed-rest and I'm doing my best to keep busy. I'm alternating between episodes of Derek, reading, crocheting and watching Investigation Discovery. It's really frustrating having to ask anytime I need even a drink of water. At least Nathan is home today...but it's going to be tough still being on bed rest all of Monday and Tuesday while he's at work. I'm also not able to go to Stanford with Mom, Dad and Nathan late Tuesday night for her three appointments on Wednesday and Thursday. My doctor seemed on the fence about the seven hour drive through the night and so we are not going to chance it. If they are going to implant, it will be within five days of the transfer, and if they don't, I don't want to wonder if it was because of something I did.

I'm cautiously optimistic that at least one of these three embryos will stick, but of course there is no guarantee. And we don't have any leftover embryos to try again like we thought we would when we started this whole process. If we're not pregnant, the hardest part will be telling my Mom who just the other day said she wants to live long enough to hold this baby in her arms. I can handle a negative test, and I know she can too...but, the toughest part would be giving her that news. So, until the test on June 18th, we will hope and pray for the best.

Other posts leading up to this are here: http://megandewitt.blogspot.com/

Thanks for stopping by! Baby dust for all!

Good luck...  hoping you not only get good news about this, but about your mother too....

wishing you all the luck in the universe

Congrats on the transfer - wishing you lots and lots of luck.  Will be looking for your good news post soon!

IVF is a big investment, physically, emotionally and financially. Who wouldn't want to optimize their outcome. There comes no day without feeling guilty and full of remorse that what happen on me before. I am jealous to hear my friend get pregnant again after having the first one. My husband and I have to work harder to get what is so easy for others, but i never give up.

My husband got sterilized when he was 20, so we have to go through IVF to get pregnant.  I am doing IVF for the second time already. June 10th is our Oocyte retrival and i am so concerced about the result. Unluckily, my HPV is positive which delay my transfer date until i get better. I am prepare for transferring embroy day with nutritions, supplements and lifestyle. It is devastated and double sad to face the reality, like HPV Positive and only 2 embroy at last, but I never give up hope. There comes no day without not wishing to make our dreams of becoing parents come true.  I find it is also a meditation for mental and physical progress especially in the terms of women.

I understand what you go through, it is sweet to know there is couples who go through similar to my experience.  Good luck for both us!